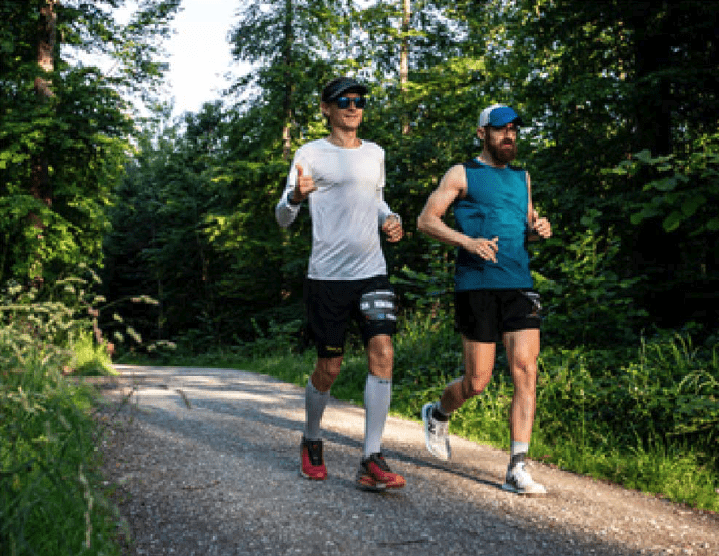 Running 275 km at the weekend

Niklas Sjöblom from Kilchberg won the first Witiker Backyard Ultra on Monday night after 41 hours of competition. The Swede would have loved to keep running.

The subsequent winner Niklas Sjöblom in a white t-shirt on an early lap on Saturday.

The first Witiker Backyard Ultra took place at the weekend – we
reported about it in advance. 44 runners started on Saturday morning at
8 a.m. for the rather crazy ultra-running competition. The participants
complete the same 6.7 kilometer circuit every hour on the hour. The
winner is whoever holds out the longest. 25 participants completed 12
hours and 80 kilometers, 5 participants 24 hours and 160 kilometers.
From hour 26 only a trio fought: the French Claire Bannwarth, the
German Michael Ohler and the Swede Niklas Sjöblom.
The three drove all Sunday. Bannwarth retired in the 39th hour of the
race, after 40 hours Ohler held out his hand to congratulate Sjöblom.
The 35-year-old Swede then ended the first edition of the Witiker ultra
race in style: on his 41st lap he ran the fastest time of the whole
competition (29:25 minutes).

With this, the premiere of the Witiker Backyard Ultra found a local
winner: Sjöblom has lived in Kilchberg with his Swiss wife and two
children since 2012. He works for a private investment company.

How do you feel after a weekend of 275 kilometers?
Surprisingly good. I don’t feel like it, but from my physical condition I
could go running again if I wanted to – nothing hurts.

Was that the longest distance you’ve ever ran?
Yes. My previous record came from my first Backyard Ultra. I won that
race outside of Stockholm after 174 kilometers or 26 laps.

Then you increased by 100 kilometers!
That’s how it is with the Backyard Ultra – the race is only over when the
last competitor gives up.

How much training does it take for such an effort?
This year it’s just over 100 kilometers a week. I had a knee injury in
2019, so I’m trying to hold back a little.

How do you stay motivated?
I wanted to train my head. Nobody forces us to continue. I never had a
weakness or a doubt. The 48 hour mark on Monday morning at 8 a.m.
would have meant 200 miles, which appealed to me. When I realized
that I had won, I was a little disappointed because the race was over –
before my goal of the 200 miles. At the same time, I have to say that a
backyard ultra is mentally easier for me than another ultra competition.
This is always only about one lap. If you have a crisis in an ultra race
from A to B on top of a mountain, it’s psychologically much more
difficult.

In Witikon, the competition lasted 41 laps, or 41 hours.
Wasn’t fatigue a problem?
No not at all. The night into Sunday I started running faster after
midnight. So I had a slightly longer break until the next lap and was
able to lie down briefly at the finish. I did five minute power naps so the
pulse really got down. Later, of course, caffeine also helped.

Did you think of victory?
I try to be as humble as I can: if I want to win, nothing can stop me.
Because I would only quit if I otherwise seriously injured myself. My
last competitor realized this at some point, and it also no longer felt safe
for him (editor’s note: Michael Ohler got out after the 40th round
because he started to see twice). We can’t risk too much just to be in the
forest for what we consider fun.

Late on Saturday evening, the group of runners getting ready for another
round was still handsome.

How long could you have kept going?
I would surely have made the 200 miles. Two friends looked after me,
one was there all the time. He should have left at 9 a.m. on Monday at
the latest. Without his support, every round would have been mentally
more difficult afterwards.

The race ended in the first hour of Monday. When are you ready to return to everyday life?
I work from home, so I just slept a little longer. On Monday I started at
10 a.m. instead of 8 a.m.

Then two additional hours of sleep are enough to digest 275
running kilometers? Can you say so, yes. (laughs)

Now what follows?
In two weeks I will run the Swiss Alpine in Davos over 68 kilometers.
And in September – if it takes place – I would like to improve my best
time of 2:28 hours over 42 kilometers at the Zurich Marathon.

So many challenges. So the question remains: what drives you?
A big motivation for me to run is charity. Whenever I take part in
competitions, I collect money to research EB, a serious genetic skin
disorder, also known as butterfly skin, which affects children from birth.

The remaining trio, from which Niklas Sjöblom (left) emerged as the
winner after 41 hours.