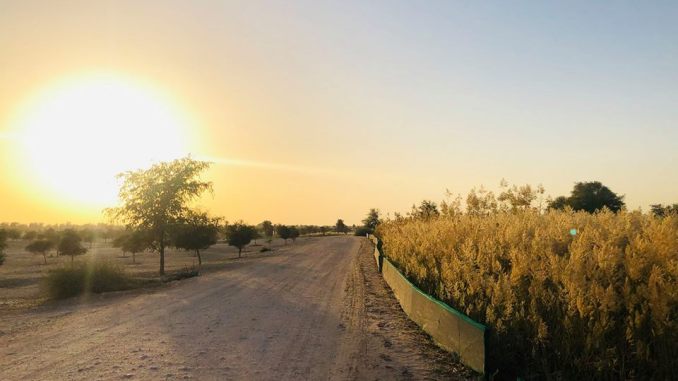 It is with great trepidation that 37 hardy souls approached the inaugural Desert Trail Backyard Ultra (DTBU) and for almost all, their first taste of Backyard Ultra. A taste so sweet and intoxicating that it forces runners to dive deep into their own reserves, a place new to many and yet entirely within their control.

The DTBU is slightly unique, all of the familiar elements are there, the loops, the jeers, the bells and whistles (more on that later) but we add some local additions, a sprinkle of Arabian spice in the form of stifling Desert conditions, 30 Degree heat, Thick dust clouds – all the ingredients for the perfect recipe of Pain, Misery and Suffering.

Athletes volunteered for this event, the first golden ticket event of 2019 from across the Middle East and across the globe. The scene was set and at 6:30am the field departed the coral on the chimes of our Tibetan yak bell, heading into the last moments of darkness and towards the sunrise and impending doom it was to bring. This first lap was on our flat road out and back night loop, a fast section that goaded many into foolish mistakes and made one runner quip “6.7km in 50 minutes and I was dead last, way too fast” how prophetic this turned out to be…

57 minutes later, the whistle sounded 3 times, then 2 then 1, an eager field filled the coral to head out onto our day loop. A beautiful loop on hard-pack desert trails with a few soft sandy sections, looping through a nature reserve and desert oasis. Runners cheered by the sounds of nesting wild birds, circled by Herons and Pelicans as they progressed around the loop (too quickly!).

As time passed, people began to drop (Lap stats in pictures and will be uploaded to DUV in time), the pretenders in it for a gentle run fell by the wayside as the mercury rose, this is the tale of the next phase.

Within a short period, the temperature hit 30 Deg C and the wind dropped, an eery yet burning calm fell on the field as they began to slow and tire in the conditions, with only the shade of a rusty garbage skip at camp as respite. So much so that one relatively early loop saw 9 precious flowers wilt in the desert heat, almost a third of the field in one cruel sunburnt blow, maybe they will prepare more wisely next time if they dare to step into the desert coral!

We soon came to a core field of hardened runners who were in this for the long haul, a core 4 that seemed destined to battle long through the night for the honour of being the last man standing. Unfortunately fate had other ideas and a few hours into the night 2 members of the core hit problems, succumbing to an injury and a digestive problem as the switch back to the hard unforgiving tarmac and relentless boring night loop took its toll.

And then there were 2 ( Rob Jones & Mark Haigney ), 2 warriors apparently working together but playing mind-games as they ran into the night, every hour, hour after hour and using more minutes every loop, now averaging a much wiser 52-55 minutes per loop as the chess game played out.

The response to the whistle became slower, 3 blows saw nothing, 2 blows lead to a raft of vocal expletives and 1 blow almost lead to physical blows. For safety the Tibetan Yak Bell (yes David, I know its not a cow bell!) was kept in its box and replaced with a hasty 5 second countdown delivered at a distance from the runners. Thankfully Lazarus Lake warned me about this turn of events, 24 hours after the finish, this is much appreciated!

Lap 24 saw the 2 warriors inducted into the DTBU 100 mile club, a moments celebration of the achievement thus far, a celebration that was to come crashing down in lap 25…

At the next lap, both warriors approached the coral, lined up to duel once again, both responding reluctantly to the 1 minute whistle and seemingly on guard. Then, out stretched a hand, a hand that represented a new lifelong friendship, that represented a sense of achievement (despite the DNF), that represented the end of the duel. Rob Jones had capitulated and Mark Haigney set off into the darkness, alone with only his twisted thoughts for company on the last lonely painful loop.

The camp was a strange place during this last loop, a handful of us staring into the darkness, scanning for an approaching head torch. An empty chair sat, like a throne, facing the finishing straight and waiting for the last man standing to finally sit.

On 56 minutes the head torch approached and out of the fog and darkness approached Mark Haigney, Mark had run a successful and strategic race, intentionally finishing last on almost every loop before rising to the top the take the crown and the golden ticket.

Mark, we salute you! We will see in the coral at Bell Buckle Tennesee on October 19th

Any Regrets?? None at all, in the words of Laz “My only regret is that you could not have suffered longer”